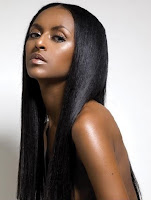 One of my daily staples and something I’m quite fastidious about is moisturising and sealing my hair daily. A recent conversation with my sister helped me realise that a lot of you might not understand the full importance of this practice and why it’s vital to maintaining healthy hair and retaining growth.
Firstly, a bit of science: hair has two main layers, an external thin layer called the cuticle that protects and an inner shaft known as the cortex. The cortex is made up of protein called keratin and contains approximately 10-14% water, which is easily absorbed and lost. Water is very important as it increases the pliability of hair meaning the hair is less rigid and is able to move/bend easily (this is why dry hair breaks).
The level of moisture in hair depends on one key factor – the humidity of the air. If the air is dry, water can be lost from the hair and if the air is very humid, water will be absorbed. Other factors which affect the hair moisture level include heat treatments which can dry out hair and porosity which increases the rate at which moisture is lost and absorbed.
In short, hair will happily take in water but it cannot hold on to it very well on its own. Hair is always seeking to balance itself with its environment and will get rid of any ‘excess’ water to do so. This is especially a problem in dry, cold environments. This is where oils play a vital role.

Oils slow down water loss from the hair by forming a barrier to prevent water from escaping too quickly. Increased water retention in hair equals increased moisture. The body produces its own natural oil called sebum which does this quite well but is easily removed during washes. Thus oils do not in themselves moisturise the hair but instead act as a protective barrier to allow the hair to retain more of the moisture it absorbs externally.
As relaxed hair tends to be porous so loses moisture quickly, it is especially prone to dryness and greater care must be taken to keep it moisturised. The most natural way to get moisture into the hair would be via washing but as washing the hair every day is fairly impractical, a hair moisturiser is required to prevent dryness between washes.
The best moisturisers are water based obviously and the first ingredient in the list should be water. They should also contain humectants as these ingredients attract water from the atmosphere. Glycerine, Sodium Lactate, Propylene Glycol and Sodium PCA are popular commercial choices. Honey is also an excellent humectant but is more commonly used in conditioners. Moisturisers can contain oils but they tend to appear further down the list as the primary goal is to add moisture. Other popular ingredients include botanical extracts and hydrolysed proteins. Try to avoid moisturisers that contain mineral oil or any other petroleum based product. Mineral oil does nothing but coat the hair leaving it shiny but dry.

The moisturiser should be followed up with a ‘sealing’ oil. Any natural oil can be used but some are more superior as they also penetrate the hair shaft and help strengthen the hair. Coconut, Olive, Castor and Avocado oil are good examples. Coconut oil is especially beneficial as it protects the hair from hygral fatigue.

Moisturisers should be applied daily or as needed and only a small amount is required. I tend to section my hair into 4 parts and apply the moisturiser to each section separately then do the same with the oil. I use Phyto 7 daily hydrating cream as it’s got a fantastic combination of plant extracts and moisturises my hair without the heavy weighed down feeling. I then seal with Vatika Coconut oil or CCB.

Since incorporating this routine into my regime my hair feels moisturised longer and breakage is minimised and that my friends is the key to growing healthy hair!